Clips from David Massey, team rider, from the Oregon portion:

A good traveler has no fixed plans, and is not intent on arriving.

Being a long-time resident of the central Oregon coast, the Earth’s ocean has come to have special meaning for me. Living here purifies the body in many ways, physical and emotional. I have become part of this life giving territory on the western edge of the Pacific Rim. This is where I ride my ICE trike.

I have driven the Pacific coast of the contiguous United States many times during my life in a petroleum powered automobile, and thus am very much aware of the breathtaking beauty to be found along its powerful shores. This year of 2013 marks the time when I will instead be pedaling the roads at land’s end. My cycling buddy Matt has long encouraged me to take this route when triking south to my mom and sister’s house in the southern Mojave Desert of California, and, perhaps to his utter joy, I will now heed his endless enthusiastic exhortations. 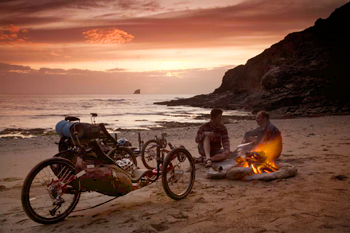 The distance from Florence, Oregon to Atascadero, California is 875 miles along the Pacific Ocean.

I may find time to find a computer along the journey to update TA readers while traveling, but, as always, don’t count on it. This pedal path is laced with many incredible campgrounds along the way, so rather than spending time typing (again) on a computer, I might be having a blast socializing with people for a change! Yep, always doing online work requires a brain-break from time to time, and NOW is definitely the time! I will, however, take photographs and a few movies, and once I arrive at my destination, rest up a few days, and get well fed by my family, I plan, as in 2011, to let the fingers fly and put it all out there for you to read. 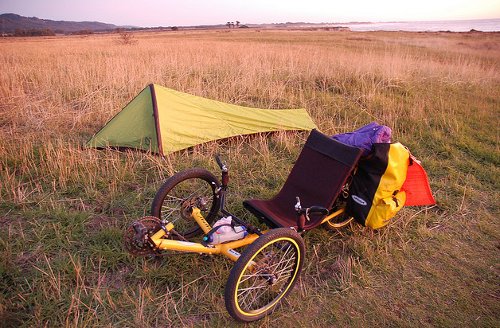 What is my expected transit time on this one? This question depends on whether I am riding solo the entire way, and also if I stop to smell the roses for a change. This trek, I am trying real hard to let time vaporize and just live in the moment, leaving my inherent competitive nature behind, and arriving at the end of the adventure with two feet that actually are still fully functional. I wish to heed the ancient sage advice of Lao-tzu on this journey, being mindfully aware as I pedal the landscapes each day of the trek.

Be good while I’m gone my triangular friends! Ride often, smile always, and live all your dreams while you can. One never knows what tomorrow will bring. See ya’ … Stevie G.

PS: This page is always accessible under the “Steve’s Stuff” main menu button.

.The Heceta Head Lighthouse, just north of my abode, is the most photographed lighthouse in the United States, or so “they” say. This photograph was taken from a foot path that leads into the coastal mountains. It is an incredible hike for those who enjoy spectacular ocean views.

Here is a tribute by the Beach Boys to the PCTA:

August 01, 2013: Only four weeks remain until the Pacific Coast Tricycle Adventure hits the road. This will be the final comment left on this page – for future details, please visit the Trike Phantoms website. Current plans have David coming as far north as Coos Bay, Oregon in a rental car, and then getting a campsite at Bastendorff County Park the first night (September 3rd). I will pedal 57 miles that day, meeting up with him at the campground. On Day Two, we shall start riding south together towards Morro Bay. California, here we come …

David met Gary Bunting (from the 2011 CCTE journey) and they rode together recently. This allows David to get some good tips from a trike warrior who has tasted the rewards of long haul triking. Learn more HERE.

June 30, 2013: Here is Glenn Frank’s video rendition of the coastal ride David took with him and six other trikers. David’s video appears directly below this one.

June 21, 2013: On June 16, David took a trike ride with Glenn Frank, the fellow known as Trike Boy with his popular YouTube video clips. It was a six hour ride that helped prepare David for the PCTA, and below is a 10 minute video of the triangular jaunt.

May 28, 2013: Riding along the coast of the United States necessarily means preparation for tsunamis, thus, I present my tsunami gear, a gorgeous four piece ensemble to dazzle cyclists as I streak by outrunning the wave. Actually, this outfit is referred to as rain gear by most normal folks. High visibility jacket, pants, booties, and gloves, all of which roll up snugly for stuffing inside the trike’s rear rack trunk.

May 21, 2013: A new PCTA website is currently in development (called Trike Phantoms), and will be loaded with all the news of this adventure by late fall 2013. Little exists there currently, yet for anyone eager to be on the leading edge of life, click here to see it in its infancy. New updates to this journey will begin appearing there, and less will show up on this Trike Asylum page.

May 15, 2013: I received a telephone call this afternoon from the Oregon State Police, Coos Bay division. Lieutenant Smartt contacted me to say that if we notify him immediately prior to our arrival in North Bend, he will have a state trooper and squad car available to personally escort the PCTA trike pilots over the much maligned bridge that spans Coos Bay. He said the trooper will drive behind us to make sure there are no negative incidents, as we would be pedaling on the roadway. I suspect few motorists would consider passing under such circumstances. We are also considering routing ourselves on the east side of Coos Bay, using the East Bank road to entirely circumvent the bridge, along with the busy towns of North Bend and Coos Bay. Lt. Smartt is the regional commander for the Oregon State Police. We must have a trike enthusiast and TA reader on the department.

April 29, 2013: Yesterday, on a quiet and partly rainy Sunday, I spent some time preparing my California map for the trip. A triker’s greatest daily concern when triking overland is the question of where he is going to stay come nightfall. On trips where I ride the hinterlands inland, this is always a point of concern, as campgrounds are nearly nonexistent, thus road turnouts sometimes must suffice. On this Pacific Coast journey however, campgrounds abound, many more than actually can be used. I prefer my map to have what I need easily observable, so I have made notes of many of the campgrounds on it, and the mileages from the previous campground with a mileage figure. A little time preparing is a good thing. Here are some images of my efforts from yesterday: 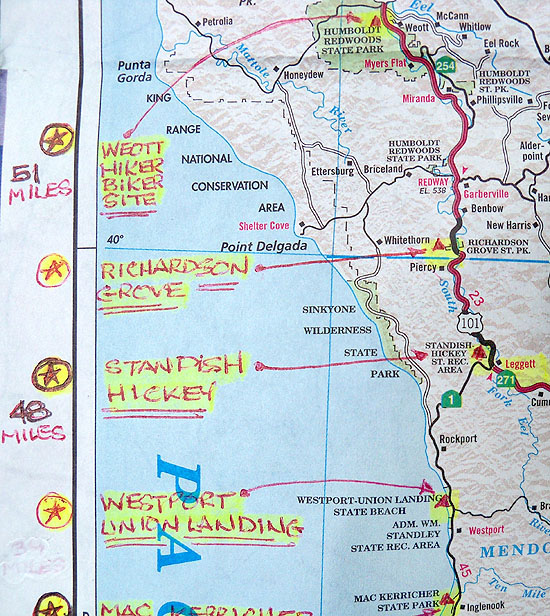 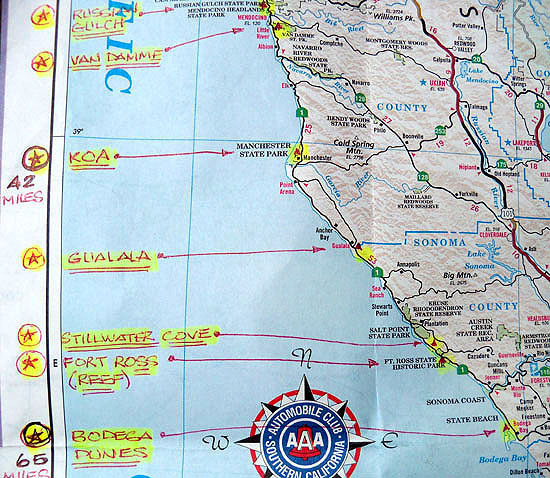 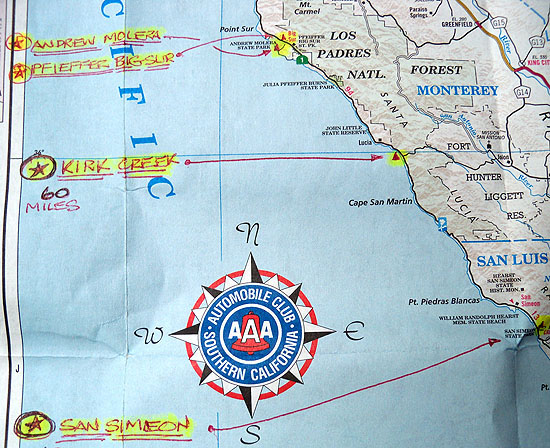 April 25, 2013: Well, David is ramping up very quickly here these days, and is sure to be a prepared triker on the PCTA. He has just acquired his Free On Three trike patch, an awesome statement of triker solidarity. Additionally, he has gone the extra mile and mounted a GoPro Hero helmet cam atop his skid lid, so you know what that means? Yep, sure enough, we are going to have a fantastic selection of incredible coastal trike movies to watch this fall once I get assembling all the media for everyone to see!

This is going to be awesome! Great video coming our way before the holidays.

April 18, 2013: David Massey is now officially a member of the PCTA overland trike team. He has squared away his scheduling concerns and is eager to pedal his new Azub trike the 850 miles from Florence, Oregon to Morro Bay, California. His work commitments require a return to reality shortly after reaching Morro Bay. Welcome aboard David! If we can get a TA reader to buy one of your beautiful paintings, that would cover your campground fees for a while. Glen Aldridge is also planning on a PCTA team spot, and once that is firmed up, I’ll let everyone here know. Glen is planning on riding a new HP Velotechnik trike. Dan Zimmerman has also expressed interest to do a portion of the journey on his Catrike 700. Gary Bunting, and his son Jonathan, may accompany the riders in his van, riding his Catrike Road with Jonathan on his Catrike Pocket for short distances on certain days. As more unfolds, it will be posted here! Oh, word in the pipe even has it that phantom biker Matt Jensen may make an appearance for some or all of this ride along land’s end.

David Massey on his Azub trike

April 17, 2013: I have just purchased a new helmet for the PCTA, replacing my Specialized Instinct helmet. The Instinct is still fine, and I love the fit, but have now moved into the higher visibility mindset for my skull, and have chosen white. The helmet is a Specialized Vice, their top-of-the-line mountain bike helmet. MTB helmets provide greater coverage than road helmets, and since I sometimes ride close to precipitous mountain cliff edges, I figured this may come in handy someday when I drop a tire over the edge. So, here is my official PCTA helmet. This helmet will set you back $85 if you wish to acquire one of your own. Here is the link to the Specialized website:

I acquired mine at the local bicycle shop (LBS) because I prefer to keep my dollars local. So, my old hippie friend Tim now has 85 of my dollars, and I now have a cool white VICE helmet. Awesome! Thanks Tim! His shop is called Bicycles 101, and can be visited HERE.

If you wish to accompany the riders of this trek, at least in spirit, you may acquire one of the small patches (2×4″) like on my trike seat mesh, thereby matching the symbol to show unity of triking brothers and sisters. This patch I have affixed to the mesh of my seat, just below the top:

How cool is this? Get yours HERE. 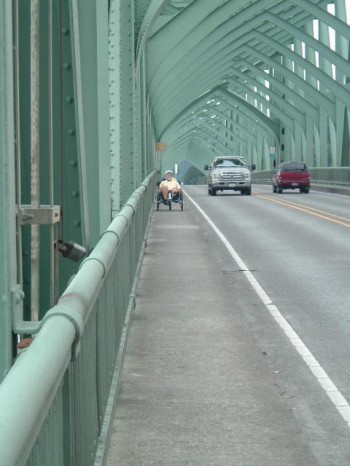 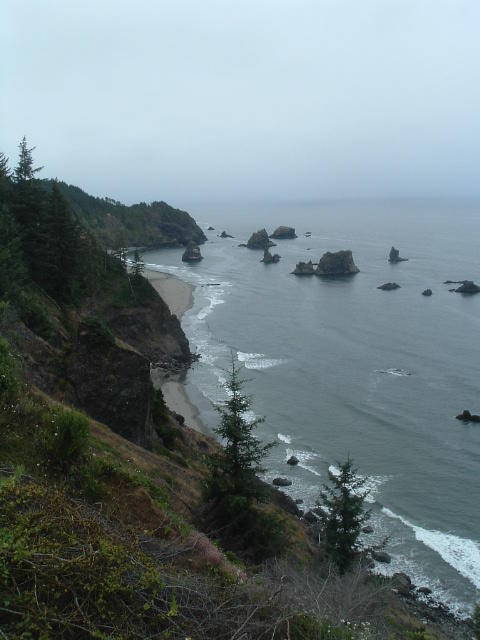