From SLOW & HEAVY to FAST & LIGHT to WILD & FREE

We humans love our stories. We tell them. We listen to them. These stories we have been telling since the dawn of humankind. Some are more profound than others, some more spiritual, some simply fun and enlightening. Some move us to new personal heights, some leave us laughing, some leave us empty, and others bring us along on vicarious adventures. Our stories are our stepping stones, the pathways that take us through the labyrinth we call the adventure of life. Some of you visit this website for technical information, while others read my thoughts to share in the next adventurous journey upon which I embark. We are social creatures. It is through our personal relationships that we find value in living here on this lava ball as it soars through the cosmos. Without stories and sharing, most of us would get mighty lonely.

So, I continue to share what little my primitive thought center knows. We think we are an advanced life-form, superior to all others on our cosmic home, with our large brain that is capable of doing such great things no other creatures can even conceive of, let alone do, but my take diverges from this common mindset. In my thoughts, I am an inferior life-form to all the others, for while they live in harmony with the natural world, never upsetting the balance of existence and the web of life, I destroy the natural world, using inventions that terminate all that are unfortunate enough to get in the way. My brain has only served, when viewed in light of the greater wheel of non-anthropocentric existence, to weaken that which makes it possible for me to exist in the first place. I do not see humankind as the central or most important element of existence on Earth. I see all as one. My stories are insignificant in reality, only serving to amuse my mind for the time it exists, and maybe even delighting others now and then.

I’m going to tell a little story of tricycle evolution as it has occurred in my ego-centered head. It doesn’t amount to a hill of beans, but you are here reading it, so maybe you also enjoy tiny hills of beans. Perhaps they enrich you too, making all our journeys a little bit easier to bear. After all, we all are making our stand on this planet together, and we all face the same end-points, so if we find little ways of bringing a bit of fun into the mixture, we can smile more than we frown. We can have hope more than we feel despair. My stories are only important insofar as they might uplift another human mind. They will all soon be forgotten and lost. We are all temporal. As the old saying goes: eat, drink, and be merry (I’ll leave out the rest of it). So, let’s have a whopping good time bantering about meaningless stuff, as we laugh and bring some perceived, albeit delusional, purpose to ourselves. This story is trivial, but I’ll take a chance and just start relating what some of my long-time readers likely already know.

Long ago and far away, here and now, a wandering cosmic nomad was drawn to escape the bounds of his industrialized social order, sensing somehow that he was brought into existence too late for his naturalistic belief paradigms. Yet, he knew this was his lot, and had to make the best of a marginal situation. He wasn’t a big city man, having had his fill of it as a smaller physical version of his current self. Eventually, this nomad found methods to escape the artificial reality of his peers, using mechanical devices that heavily and indiscriminately dispensed life-destroying elements into the breathing supply, as his transport. This brought conflict into his thoughts, that he was using ruinous equipment to get him into the wild hinterlands. He loved nature, but was also doing his part to put an end to it just to see it. The wandering pilgrim found a solution, becoming the engine of his newfound tiny vehicle, and eating beans from the hill of beans as the fuel to propel his adventures. He never visited Chevron again.

When he gave up cars, he wanted a tricycle designed to keep him deep in his wilderness realms, off the beaten path, but living where there were hardly any tricycles, and certainly no dealers, he ended up getting a little-used ICE Qnt trike because no tricycle manufacturer made a model that could allow him access to all the places he used to go in his Jeep. In his car days, he had both Corvettes and Jeeps, enjoying what each had to offer, but always ended up preferring where the Jeep would take him. Corvettes were fast, but had little utilitarian use. They were only good for getting citations from the regional constables. Jeeps were escape vehicles. But in the world of human powered tricycles, the cosmic nomad got the equivalent of a street machine.

The wandering tricycle nomad rolls along pushing 375 pounds in 2009.

So he pedaled his ICE Q on his first overland journey, but worried that due to the slowness of the machine, he might perish prior to reaching the next remote store for resupplying food. So, this enthusiastic triangular vagabond decided to bring his own food. Lots of it. So much in fact that he had to pull a large trailer full of 50 pounds (22.7 kilos) of food. This human-powered human had enough to eat for about two weeks, so scared was he of starving out there. His vehicle length was about ten feet, and the rolling weight, which included him, topped out around 375 pounds. This is what he came to eventually term “slow and heavy” travel. The effort to move his gargantuan load down the road, up the mountains, and across the deserts used up more calories than he could replenish each day. The nomad had to find a better way. 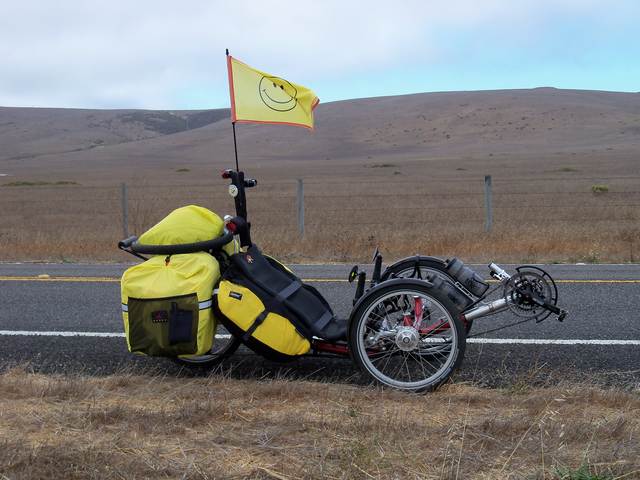 Our trike gypsy was wiser in 2013, pushing about 85 pounds less weight (no full trailer).

The next trip, he did not bring a trailer, and learned to exist using ideological strategies employed by backpacking hikers. This worked, and by shedding about 85 pounds worth of cargo. the ride was considerably easier and more enjoyable. Yet he longed for an even better solution, realizing that if losing 85 pounds could make treks this much easier each day, then losing even more should result in even more fun, while preventing overuse injuries to his body, which was the engine behind it all. With this mindset, he sold the Q, and purchased a real speed machine, called a Catrike 700, the tricycle’s world equivalent of his old Corvettes. It wasn’t as robust as the Q, but man did it ever fly! He got little panniers, and further refined his cargo load to the absolute minimum any human could hope to have and still be functional. He came to call this model of touring “fast and light” because the ease of pedaling was so effortless that he could pedal many more miles with much less effort. 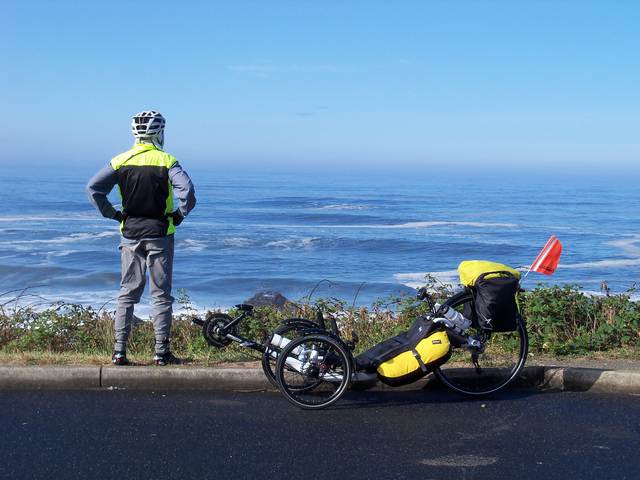 Fast and light reached its zenith at the total rolling weight of only 260 pounds.

With fast and light travel however, there came drawbacks. If you cut something back far enough, there will always be consequences that are not favorable. Even though his light vehicle and panniers could be lifted onto a picnic table by himself, and even though his total rolling weight had further dropped to a mere 260 pounds, which included himself, and even though he had no limits to where he could venture on pavement, he was still restricted to paved surfaces used by automobiles. He still had to share the road, and most of the territory through which he adventured was beyond the reach of a low, fast, and light street trike. It’s like wanting to explore up an old dirt road in the mountains through the rugged canyons, but only having a Corvette. With his fast and light machine, he had to remain on pavement, and if the pavement were not glass smooth, the ride comfort was anything but comfortable. The confused nomadic drifter had run the gamut from one extreme to the other, from slow and heavy to fast and light, and he still was missing his primal backcountry days of Jeep roaming. He yearned to be wild and free!

About this time, a deep reverberating rumble shook the recumbent trike world, both figuratively and literally, as monster tricycles with motorcycle-sized tires came into existence. After more than six years of pedaling along on highways, going deaf from the whining tires of millions of high-speed autos, our hero realized that his first love and vision of backcountry travel on a little vulnerable tricycle had come true. His dream machine was his for the taking, assuming of course that he could muster enough financial resources to acquire the mega-priced monster rig. He came up short, and was forced to sell his 700 if he wanted his off-road buggy. So, street trikes were a thing of his past, and he became the owner of what he called a fatrike, with giant over-sized tires that laughed at the terrain that would stop cold any other tricycle. Now, he could explore and ride where other trike pilots never could imagine going. Soft tires and suspension made his tricycle a dream to ride. Of course, this was the heaviest trike he had owned or ridden.

But … it had a different purpose, and that was to be a vehicle with go-anywhere capability, meaning that sharing the road was no longer necessary if he didn’t feel like it. This was his magic carpet ride into the wild and free hinterlands. The lessons he had learned in his evolution from slow and heavy to fast and light however would not be forgotten, so even with the latest set of three wheels, he would still be lighter than his slow and heavy days, but still heavier than his fast and light days. The trade-off was worth it to him though, because he was visible, highly visible in fact, compared to his low trikes of the past. Happy days were upon the realm at long last. Now, the tricycle nomad could go camping way up in the mountains where cars did not exist, pitch his tent in the peaceful forest with the wilderness animals, and play his meditative Native American flute as he drank in all that the natural world so generously provided his senses.

Not fast and light nor slow and heavy, but just right for exploring almost anywhere.