Dan Price set out for the journey of a lifetime on November 4th 2002. Having found the perfect vehicle for his hobo artist lifestyle and philosophy, he slowly pedaled out onto the roadway in eastern Oregon, bound for the west coast. Dan had teamed up with TerraTrike to ride one of their recumbent tadpole tricycles around the United States. Originally, the route was scheduled to be longer, however circumstances led to other results. Any way you look at it, Dan’s journey is one to be admired by all rugged and adventurous cross country trike pilots. He had little cards he handed out to inquisitive people along the way. Here is how they read:

Author/illustrator Dan Price is riding a TerraTrike  around the U.S. to promote human powered transportation. The trip is being documented in his illustrated journal MOONLIGHT CHRONICLES and on the WIZWHEELZ.com website. To order the latest CHRONICLE and help support the ride send $5 to Box 109, Joseph, OR 97846

Dan writes about and illustrates his vagabond life in his Moonlight Chronicles, small books that are 120 pages long and eight by five and a half inches in size when opened. Most of the text is hand written. Each book is loaded with his hand drawn pictures. Some also contain a few photographs. He devoted three issues to his trans-America trike trek, a total of 360 pages all about what it’s like to ride a recumbent tadpole tricycle down the west coast, across the southern states of America, and then out to the tip of the Florida Keys. He sat in that recumbent mesh seat for nearly 4500 miles, on an epic journey that lasted just over 3 months. 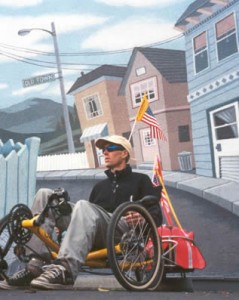 Dan on his TerraTrike

During the first days that he had his TerraTrike, which he affectionately named Tera to keep him company during his hundreds of days and thousands of miles out on America’s roadways, he wrote a few words about his new mode of transportation. Here is what he said:

“You’ll have to excuse me for going on and on about Tera. It’s just that I’ve been hunting so long for a hobo-like mode of transportation that’s economically feasible, doesn’t  pollute and moves across the landscape at a reasonable speed. Hobo-motion includes hitchhiking, where you beg for rides, train hopping, where you wait around for the train schedule to match yours, and walking with a pack, which is way too slow.

“By comparison the trike is perfect. You move along at a slow enough clip that you can actually appreciate what you’re seeing. You get to have an intimate experience with all that is around you, even the cold! I’ve seen, up close, young sprouts of winter wheat and many things of interest that I would have never seen from inside a car. And for us folks who admire highly crafted technological conveyances, riding a trike is so like being INSIDE the machine. You are the engine, the life force. Without me, Tera just sits there, still and inanimate.”

Dan lives on two acres of land he leases for $100 per year, out in the wilds next to ultra rural and remote Joseph, Oregon, in the far northeast corner of the state. His primitive home is not far from spectacular Hell’s Canyon, and sits in view of the majestic Wallowa Mountains, part of the Eagle Cap Wilderness. Fields of Aspen trees grace his abode, which consists of handmade structures that shelter Dan from the elements. It’s best described as a real Hobbit-like environment, built into the surrounding terrain from rocks and wood. He has a small office space where he creates his chronicles, a sauna room, and a tiny stick garage for his trike.

Hobo Dan provides great insight to anyone who is contemplating an overland trike journey. He is helpful on the telephone if you are lucky enough to find him in proximity to one of his few concessions to the modern technological world … his cellular telephone. His three chronicles about the actual trip are absolutely fascinating reading for any triker, even those who remain within their city’s limits. This fellow is so alternative that he just makes for introspective thinking in nearly anyone’s mind. Is a high paying job really necessary? Do we need our big fancy houses? Must we drive toxic automobiles everywhere we desire to go? Are there better ways of living? These are all questions that Dan brings to the forefront of readers’ minds.

Here is one brief excerpt from his trip, where he was confronted by the dreaded Trinity River bridge outside of Houston, Texas, a stretch of roadway considered impassible and lethal to cyclists:

“3 PM rolled around and I had escaped the city, caught a $5 shower at a KOA, then came face to face with this monster of a bridge that 3 bikers had told me was impassible. It was filled with fast, constant traffic and had absolutely no shoulder for me to ride on. Tonight I am camped nearby, still not knowing how to get across it.”

Later, as the chronicle enters the next day, Dan goes on to recount his bridge experience:

“Well, I’ll bet you’re dying to know how I got across that bridge? The next morning I was up quick like a bunny at daybreak and over near the bridge. And even though that heavy traffic never did cease coming ALL NIGHT long, I caught a momentary lull and sprinted as fast as Tera could go up the steep side and down the other. Somehow I had found a window when no semis were crossing and all the cars pulled into the left lane. Whew!”

More recently, Dan also rode his TerraTrike all through the state of Hawaii. He really gets around. You never know where you’ll find him. Where is Dan now? Find out in his Moonlight Chronicles.

All ye pedal pushers and lawn chair lovers UNITE! It’s time to preach a new gospel in this auto-laden land. Tell neighbor, friend, and foe alike, that three wheels are better than four. That true stability, added endurance and a relaxed demeanor, add strength to our quest to truly FREE the freeways. That ONE LESS CAR shall be our motto. That GAS FREE shall be our cry. That our children’s, children’s, children may experience a day when all human beans become participants, practitioners and proponents of PEDAL POWER. That it’s not the destination but the JOURNEY that matters most. That riding means better health and longer lives, and living in the HERE and NOWS. Spread the message far and wide. With LESS we can be MORE. With PEDALS we don’t need PETROL. With DETERMINATION we can live the DREAM!

What follows below are some images from the three MOONLIGHT CHRONICLES issues that document his trans-America trek in 2002 and 2003. The first three images are the covers of issues 32, 33, and 34, which are actual size. The subsequent images are but a few from inside the tiny chronicles, with the pages opened, so you are seeing a spread across two pages. These open page images have been downsized for this website, but are still readable. At the bottom of this page is a ten minute movie produced by TerraTrike, called “Part of the Solution”, which pretty much sums up what Dan, his philosophy, and the trike journey are all about.

At the time of the trip, it was believed that the final distance of around 4500 miles was a record for anyone on a recumbent tadpole tricycle. Records aside, this was truly a feat worthy of great admiration, as anyone who has pedaled hundreds or thousands of miles on any type of human powered cycle can attest. 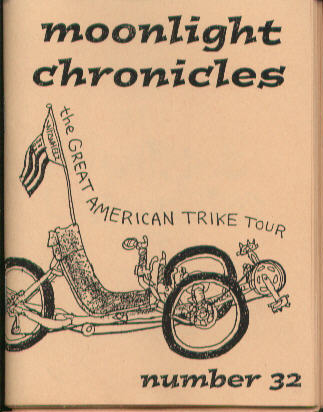 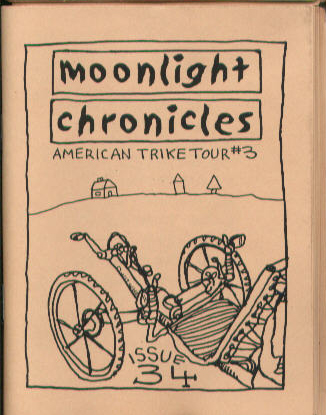 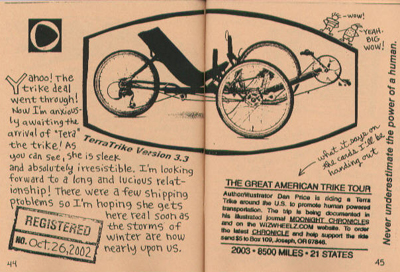 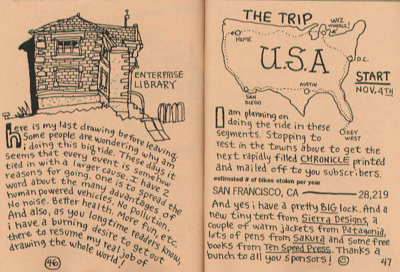 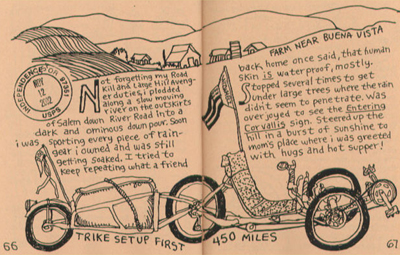 If you are interested in reading more, please visit Dan’s Moonlight Chronicles website, where these three books, along with several years’ worth of others, are available for your adventurous reading enjoyment!

Let’s suppose you have been motivated by Dan’s life view. Can you make a go of it for yourself? Sure you can! How? Just acquire Dan’s book called Radical Simplicity on his website and learn all about what’s necessary to experience the simple life too. I’ve read the entire book myself, with great anticipation. Dan leads us through step by step on how to break the bonds of modern insanity, and presents the joys of living with basics. He helps us to create an authentic life!

Getting a trike is only the beginning …

You may also enjoy reading the TerraTrike blog about Dan. Click HERE to see some photos of the hobo artist in action.