This page presents the chapter documentaries from the year 2014.

Well, lets hope the preparation has payed off, because it is time to go. I leave my Expat home in Ningbo headed to Hangzhou. Will i make it there? its about 100 miles…. I decided to give myself an edge and have Anny carry my gear in a assistance car for the first leg, just so i can get used to riding and make the best time. One day down… 5 years to go!

Day 2 on the road and I decided to go fully loaded. Today i want to make it to Hangzhou! Mother nature put up a little fight, but all is well. JaYoe! I got a chance to try out my rain cover anyway. See a little background on how i put that together.

Stuck in Hangzhou while I wait for my new trailer to arrive, I decided to check a box off the bucket list. I have always wanted to feel what it would be like to have a full body professional guided body detox. A few of my trusted friends told me of the benefits of having a complete body overhaul, including the mysterious and embarrassing but overall beneficial “colon” cleanse.

Well… the time has come. Anny helped me get off to a good start, but its time that I lived up to the “one man” part of my trip. I’m headed to Huangshan from Hangzhou, with some difficult hill/mountain riding in-between. I’m getting a feel for riding, and starting to get the hang of solo travel again. Some beautiful landscapes, local food, and peanuts await.

Huangshan is a big city. The lower half is the urban area, and the upper reaches stretch all the way to Yellow Mountain. So before we head up to the mystic mountains, let me take a look at downtown. Particularly Tunxi, with a old street, cool stuff to see, and some stinky fish.

Trike Hobo note: Matt’s rolling weight, as learned in this movie below, is currently 408 pounds. He will be very strong after pedaling this planet!

Off and Up. From Huangshan City to Huangshan Mountain. A long windy road to a beautiful place.

NOTE: To you damn Yankees that don’t understand the metric system (of which I was one)…. I took some extra time and put in the conversions for you. No more asking me what pounds or miles that was! ;)

Moving from Huangshan to Nanchang, I passed thru the city of JingDeZhen. You may not have heard of it, but I am sure that somewhere in your house or your family’s house, there is an item on a shelf that owes its existence to this city.

JingDeZhen “created” the art of ceramic. And over 1000 years have passed since its discovery here, but time did not dim the industry. Today JingDeZhen is a bustling, albeit dusty, city build on the production of porcelain and ceramic. Take a walk with me as I investigate a couple spots inside the city, and learn a little along the way.

In the video we visited two places, Ming Qing Garden and factory district, as well as Fang Jia Jing China and Copy Market.

A surprise second day in Jingdezhen. My new friend wanted me to stick around another day so that he could show me a bit more of his home. He showed me where he works and some things that make Jingdezhen, his hometown, a special place.

He took me one place in particular, San Bao Ceramic. A very interesting place that mixes the culture and history of the Chinese ceramic industry with a bit of western influence.

During the ride from Jingdezhen to Yugan then to Nanchang, it was hot… really hot. And dusty… really dusty. And the roads were bad…. Really bad. I found myself passing time thinking about some people I have met along the way, and dodging interested people trying to figure out who I was and just what the heck I was doing.

Warning…. I say the f word in this chapter… but don’t worry, I let you know before it happens.

With my computer fixed and in my possession again, it was time to get some videos finished.  Anny hand delivered the computer along with some new items and stayed with me during my time in Nanchang.  This mostly involved chilling in my room glued to the computer screen, but on the last day I ventured out into the city to do some exploring.

Unfortunately, it turned out not to be the best day, and the city did not look all that great on our one day exploring.  It was quite a disappointment.  But you know, it cannot always be positives on a 5 year journey around the world, and maybe you can learn from one bad day as much as you can enjoy one great one.

Leaving Nanchang, I head to the city of Ji’an.  It’s a long road through the Chinese countryside.  Lots of inquisitive eyes… and attempts at conversation.

The prefecture city of Ji’an is not necessarily a tourist destination. Which is why I took it as a chance to work on my videos there for a week. Looking out the window every day I saw the locals going about their lives, so before I left I took a day to travel around and get the perspective of local life in a normal mid sized city in china:

Here is where I make the travelogues in my mobile studio:

This is a little bit different from my other chapters.  It is all riding.  The longest ride yet. This ride started at 7 am and ended the following day at 3 am.  There were mountains, thunderstorms, rough roads and the dead of night.  There is even a fart in there if you listen close..  (fart humor… I know it is not the greatest.. but it made me laugh):

Leaving Ganzhou I start heading south, ready to push on to Guangdong province.  The roads along the way are not fantastic, and prove too much for my trailer to handle… so I have to solve my second trailer structural failure of the trip.

Headed out from Xinfeng, trailer “fixed”, I spend the next few days rolling down dirty highways, enjoying the long stretches and being careful not to rattle the trailer any more than I already have.

Continuing south I began to get tired and lazy. But to the left of me in the distance some strange looking mountains began to rise into view. As I passed a visitor center, I decided to stop and make a day out of a visit to the Wuhan mountains of Jiangxi Province. 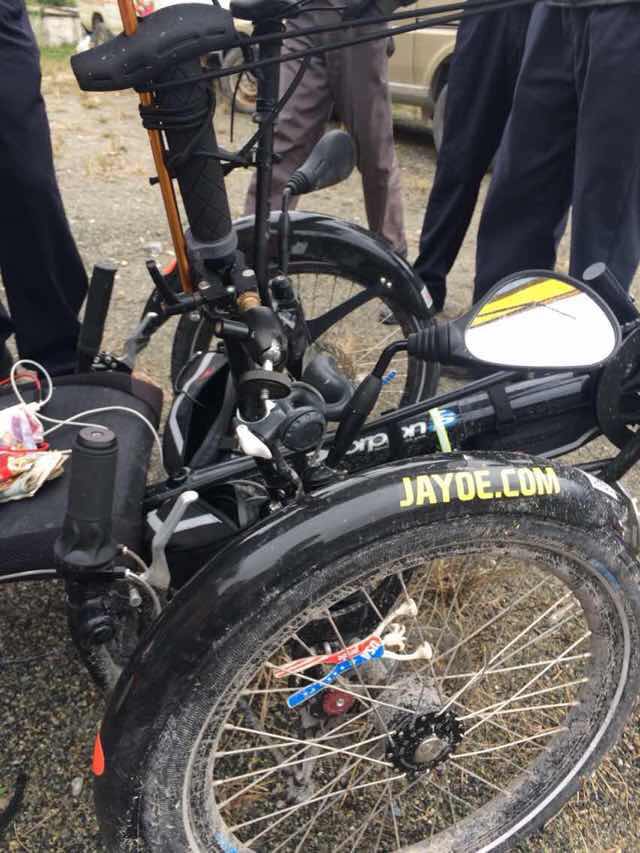 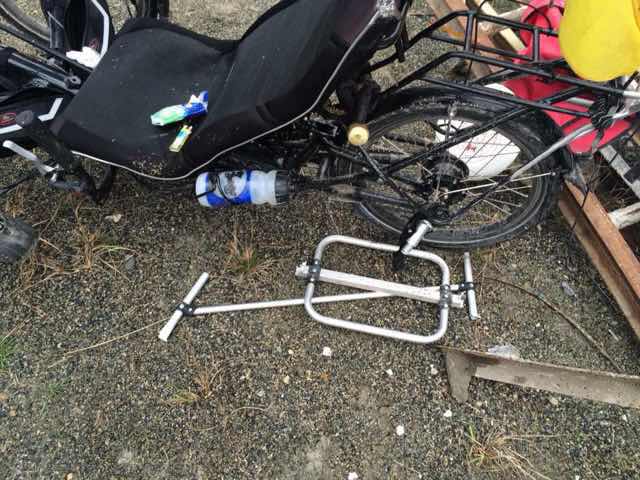 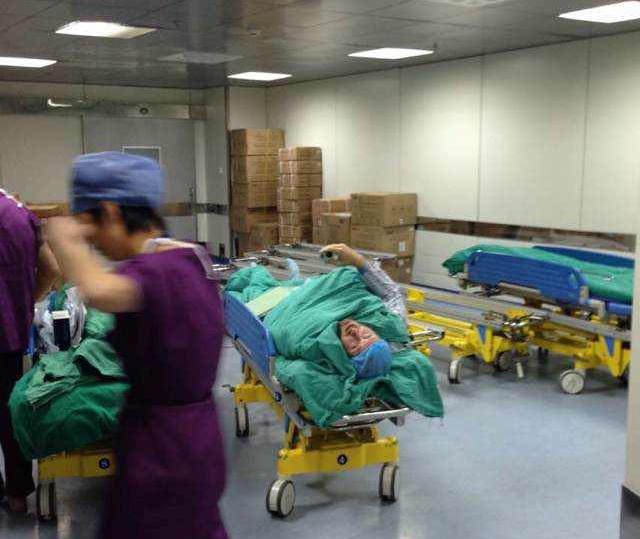 Getting ready for surgery 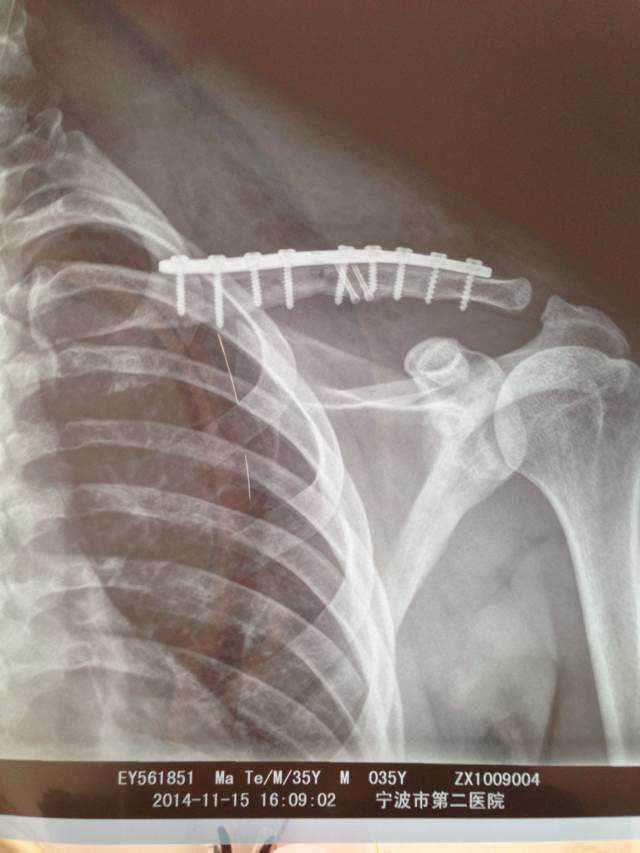 An hour and a half, and 11 screws later

Click HERE to proceed to the 2015 portion of the journey.

By the way, if you want to know a few of Matt’s suggestions about taking an overland tricycle journey, he has authored a guest chapter in The Overland Triker book, which you may notice in the sidebar on the right hand side of this website. Matt’s chapter is called: The Road Is The Ultimate Teacher, and he gives it to you straight for any trikers about to head out on such an adventure of three wheels. Know before you go!